Broadcast from the supplementary course – bag-making in the tropics – a short course to complete the project started two weeks ago in Gail McMahon’s class …….

And the field has gathered for the running of the supplementary bag-making course. There are two scratchings – Faith and Julia were unable to take the field and, as a result, Joan, previously on the reserves bench has been given a run.

So a great line up this morning with the field eager to start. But wait! Under starter’s orders and there has been a late suspension. Di has failed to bring her equipment so she is unable to participate today and has been relegated to the viewing enclosure. What an upset!

The field is now down to seven but these are the thoroughbreds. Jane would have to be the favourite being the first to finish the zigzag quilting leg at the last start. Testing her will be Elaine who came up well after the last run and started today with a bespoke embroidered bee on one of the flowers on her bag which caused some anxiety among the other runners.

So Gail starts the class and they’re away. Jane has gone out strongly, Debbie also steaming forward, Angie settling down well and Elaine pressing on with Tracey not far away. 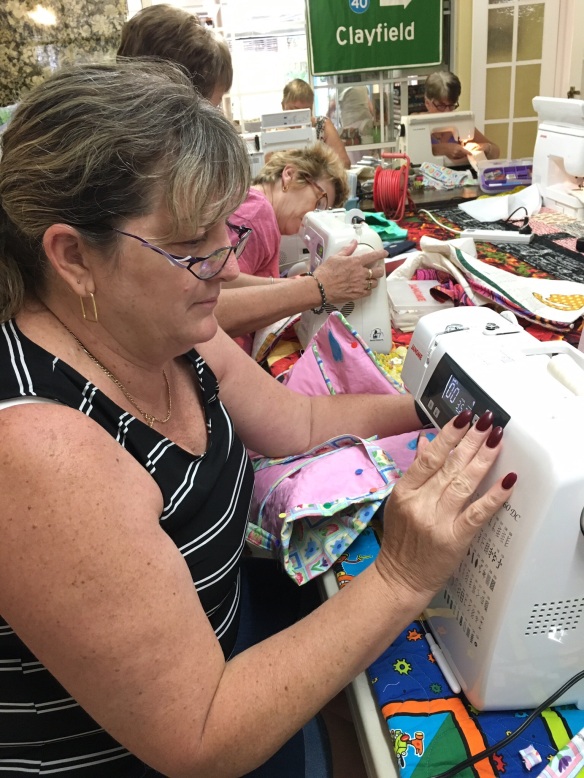 The speed is on early on this track and the novice Joan appears to be hemmed in on the rails by the veteran Joananne. Both are two lengths back at the cutting table and appear to be struggling with the multiple strips required for the piping and handles. 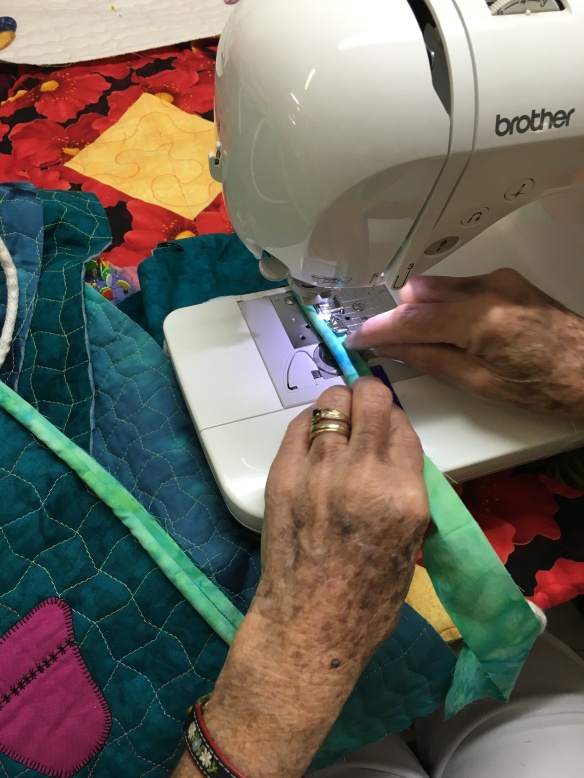 Jane is keeping Debbie out wide and Elaine has settled in nicely on the rails. Tracey, opposite the air conditioner, is nicely placed for the length of the race and Angie is striding along well, after an initial problem at the start of the race.

The officials have called for an early suspension to the race so tea and coffee can be dispensed and then the field settles in for the final leg. Joananne has tired badly and is well back as her sewing machine becomes affected and starts to sew by itself. Clearly there is a problem here and Joananne has had to retire from the field and consult the vet. She may well claim interference and lodge a protest but for today her race is over.

The remaining field are travelling well. Joan has overcome her initial problems and is now up with the leaders. Oh and here’s another upset! Jane has not followed the starter’s orders and has chopped the ends off her piping cord before sewing the pocket onto the bag. Can she recover at this late stage?

Angie, the quiet achiever is in the clear and will start her home run soon. Elaine is assembling the lining and looks set to finish well. Debbie has pulled away and is two lengths away from the field.

The starter has signalled the end of the course as the field take the last turn. Jane has the whip out and looks set to test the frontrunners but it’s Tracey! Here comes Tracey! This outsider has come through on the outside and is ahead two lengths. Debbie is trying everything to peg her back and may have taken a unwarranted detour that will cause problems at the end, Angie is out wide and is giving it her all. Elaine is putting on speed here at the end but Joan is tiring badly and it looks like she is packing up. But it’s Tracey a length in front and Tracey takes the ribbon for the first completed bag. What a win! 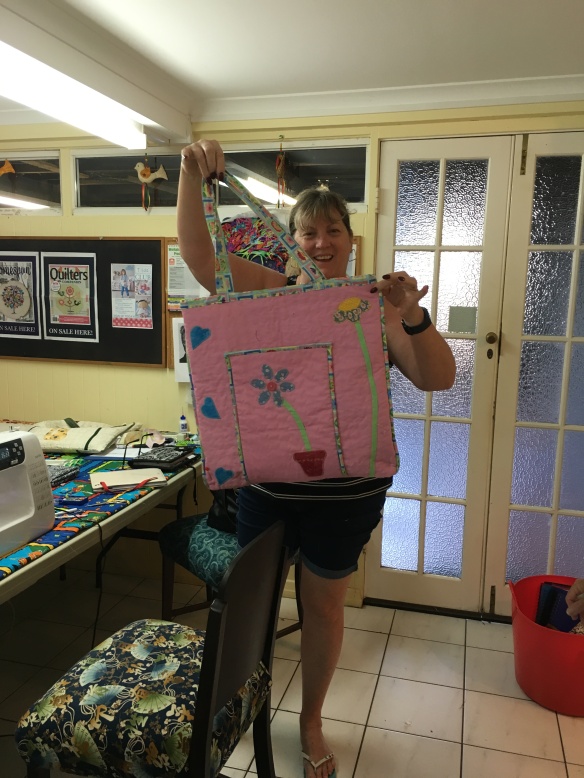 Elaine and Jane in a photo for second, Angie not far off, Joan in next with a brave effort, Debbie disqualified for inappropriate pocket application. A very controversial win and another great course for the Apatcheez and we look forward to the next event.

Until then happy quilting.

You are a crack up Kaye. It was an enjoyable day.

Have you ever thought about working at the races Kaye? I think you would do well.???? See you Wednesday 13th

> Apatchy Kaye posted: “Broadcast from the supplementary course – bag-making > in the tropics – a short course to complete the project started two weeks > ago in Gail McMahon’s class ……. And the field has gathered for the > running of the supplementary bag-making course. There ” >

Wow Kaye!!! You sure make everything so interesting, just amazing and I’m sure you all had heaps of fun!!. Hope to see you in Melbourne as I will be there I think on Wednesday!!

We are at the show on Friday and Saturday but a couple of others will be there earlier so you will probably see some familiar faces!!